This is the description of brewhouse prices brewing brite tank

The brite tank is used for carbonating the beer and the beer is then either served direct from this vessel via beer lines to the tap (commonly seen in brew pubs) or is kegged and/or bottled (as in a microbrewery).  In brewpubs the number of serving tanks generally determines the number of different beers on tap.

The cooling system is a dimple jacket with insulated Polyurethane filled.  All tanks are designed for up to 14.7 PSI and tested at 30 PSI.  The inside of the tanks are polished to Ra<=22um and the outside is a brushed / Satin finish.

-   Inside of the tanks are polished to Ra>.22um & the outside is a brushed / Satin finish.

-   CIP with Spray Ball and downtube;

On the "Blue Monument" in the Louvre Museum in Paris, the Sumerian people of Babylon in the third century BC document their goddess with beer. In fact, the inventor of beer is Sumerian.
The Sumerians, who lived in Mesopotamia 6,000 years ago, made the original beer from barley malt but the beer was not rich in foam at the time.
About 3,000 years ago, Seymour people around Persia learned to make beer, and they also carved beer on the plate for the goddess of farming. In 2225 BC, beer was popularized among ancient Babylonians, who entertain guests with beer. At that time ancient Egyptians and ancient Babylonians noticed the medicinal value of beer, have to use beer for making drugs. The Greeks also love beer very much, and they learned how to brew beer from the Egyptians.
In the 4th century AD, beer spread throughout northern Europe. Beer types began to become rich, of which the British honey and water mixed brewed honey is the more famous one. The dark stout appeared in Britain is also very famous, and is very similar to the modern dark stout. In the first century AD, Irish brewed a beer that resembled the modern, light-colored beer.
Welcome to consult brewhouse prices

Looking forward to your inquiry for this brewhouse pricesbrewing brite tank 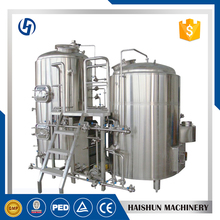 We have received your message, we will contact you very soon.
Oops! Something went wrong please refresh the page and try again.